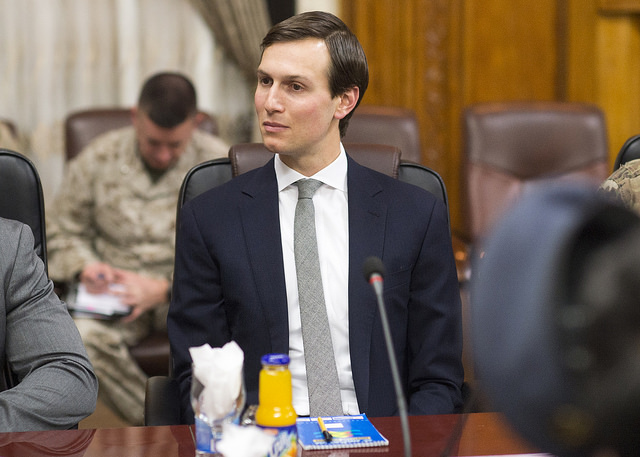 Jared Kushner, senior advisor and son-in-law to President Donald Trump, has been an elusive and mute figure in the Trump White House, but last week Mr. Kushner held a press conference on the topic of governmental efficiency.

It was the first time most journalists, pundits, and media personalities had ever heard his voice, and many were astounded to hear what his voice sounded like.

Many listeners made fun of his voice for sounding like Michael Cera, a eunuch, and/or a prepubescent boy, and mockery of his comments has since gone viral on social media.

After the press conference was finished, a Halfway Post reporter who was sitting at the side of the room watched Kushner leave the podium and take a seat a few chairs down and sharply rebuke an aide for convincing him to agree to the press conference.

“I knew this was a bad idea,” Kushner said to the aide, his voice slightly cracking on the word “knew.” “I never should have listened to you. If only I had a deeper, more brawn voice… I could rule the world. But instead I have been cursed with the vocal cords of a meowing kitten. They can laugh, but soon I will get my revenge. All is going to plan, and once I’m finished people will stop laughing at me. Yes, they will never laugh at me again. Oh, how they’re gonna pay, they’re all gonna pay!”

Once his aside of diabolical threats to his critics—or perhaps the entire world—was over, Mr. Kushner left the conference room.

Fortunately, The Halfway Post’s reporters are trained to never turn off their recorders until they physically walk into their homes, overhead costs be damned, and the audio was captured.

(Photo courtesy of Chairman of the Joint Chiefs of Staff.)