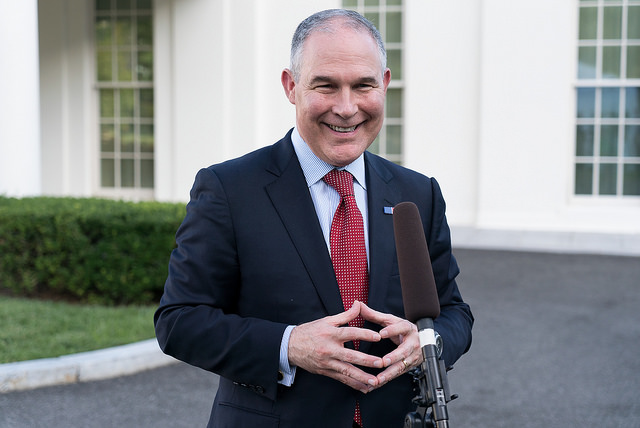 Administrator of the Environmental Protection Agency Scott Pruitt responded to allegations of widespread corruption in his administrating by promising he would “stop being totally corrupt” and would henceforth no longer be embezzling taxpayer money in lavish travel expenses and gratuitous salary raises for his his assistants.

The following is the statement he made in the White House press briefing room:

“I am sorry I’ve been such a dunderhead,” explained Pruitt in a press conference this morning. “I will no longer fly on private planes or in first class. From now on it will be business class, and nothing better. I also promise that from now on when I conduct official EPA business lunches I will not host them at five-star restaurants. In the interest of thriftiness on behalf of the American people who are ultimately my boss, I will restrict myself and my fellow EPA administrators to only four-star restaurants. I have been careless with the accounting in my department, and I realize that these expenditure scandals have been an unfortunate distraction from all the courageous and vitally important work the EPA is doing in selling out the beautiful national parks across this great country to private exploitation and depletion. The EPA right now is taking unprecedented steps in transforming the wealth of raw, natural wilderness in America’s public lands set aside far-sightedly for posterity into great profits for fossil fuel corporation shareholders. That is the beauty of America and the free market: saying f*** you to all the future generations of Americans yet to come, and cashing out all the nonrenewable resources, endangered species and ecosystems, and whole sources of water the Earth has left for a few sweet, sweet decades of wildly hedonistic capitalist middle fingers to moderation—ah, crap, I think I just came in my pants! To wrap this up, I want to apologize to the American people and let them know that I am taking the EPA’s finances seriously, and I will promise to stop being totally corrupt. Seriously. I’ll only ride my limo to work on Mondays, Wednesdays, and every other Friday. And I’ll tell you what—when I light my lunch-time cigar, it won’t be with a fifty dollar bill anymore. I’ll only light my cigars with burning tens. Okay, fine. Fivers. So anyway, yeah. I’m sorry, everyone. In closing, I have heard it said that the America people wonder aloud as a kind of chicken-or-the-egg thing whether President Trump turns the people who work for him terrible, or if he merely attracts already terrible people toward him, and I hope this apology proves once and for all that I, Scott Pruitt, belong to the former group of Trump acolytes. God bless America, and God bless the environ—Ahhahaahaahahaha! I couldn’t even say it with a straight face.”

(Photo courtesy of the White House.)