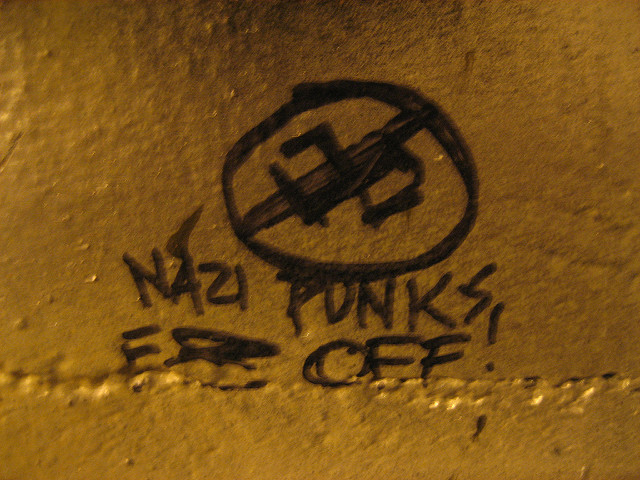 Local neo-Nazi Andrew Lemdon got into an argument with virtually everybody he knows today because he was photographed participating in the violent Charlottesville, Virginia rally for white supremacy and his friends identified him.

Lemdon’s family is particularly upset with him, and the ordeal has left him struggling to answer for the stupid white supremacy world views his parents did not teach him. Lemdon is especially upset that everyone keeps calling him a racist.

The Halfway Post reached out to Lemdon to give him a chance to explain how being a neo-Nazi didn’t make him racist, and he failed pretty miserably.

“I’m not racist,” Lemdon said. “I just think that America is a white country, and that other ethnicities and religions should stay in their own countries. But I’m not racist. I just don’t think brown or black people should be allowed in the US, and if they’re already living here they should voluntarily leave. And if they don’t voluntarily leave, then we should force them out. And once they’re all kicked out, we should erase hints that they ever lived there with book burnings and history book revisions, and stuff like that. And we should nuke the entire Middle East to stop Islam. And build a big wall so no South Americans can come in. And we should end all immigration because immigrants are less evolved and don’t have superior white people’s genetics. And end the Constitutional rule that says if you’re born in America you’re automatically an American. The Founders only intended for that to apply to white people. Oh, and maybe bring back slavery for black people. But as I was saying, I’m in no way racist, and libtards are racist to imply that I’m racist. People calling me a racist just don’t understand the white supremacy movement. I love everybody. I don’t hate anybody. I just don’t think the majority of the Earth’s population should be allowed in America, and if they’re here we should be able to harass them. I’m totally not racist.”

Unfortunately a LOT of the Alt-Right believes this stuff and have been empowered by President Donald Trump to express these views publicly. Stand up to them wherever they step on American values.