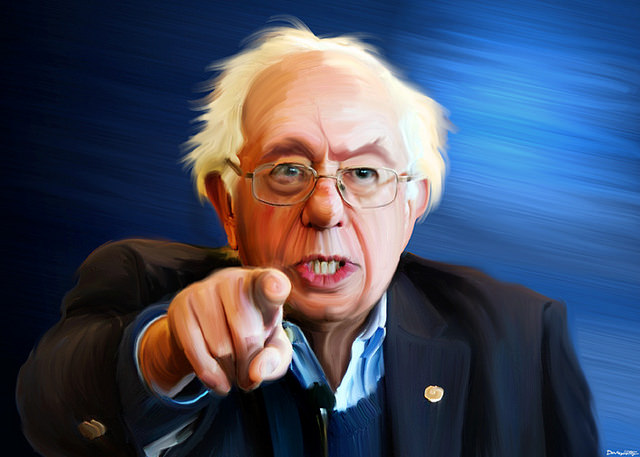 In an interview with God, The Halfway Post learned that God has an early preference for Election 2020. God, one could say, is feeling the Bern a bit.

The Halfway Post interviewer vigorously played devil’s advocate, but God was in good spirits and more than willing to explain Himself.

“Bernie Sanders is basically the second coming of Jesus,” God said. “But I learned My lesson from last time, if you know what I mean. Number one, I didn’t send Myself down. You humans are filth, and you all gave Me a rash that lasted for like 300 years. Plus, to be honest, I may have overdone it with the suffering and pain when I Created Earth. Being crucified sucked major dick! Ah, sorry, that’s a subtle gay slur. I shouldn’t have used a homosexual act of love as a synonym for a negative experience. I’m evolving on the issue, you know? But, like I was saying, I learned My lesson. I’m not personally undergoing any more trauma with regard to you losers. I don’t know how Prometheus does it—getting his organs torn out by an eagle every single day. Holy Me. Prometheus is always giving Me crap for just being crucified one time, and for one day, and then calling it quits. Yeah, way too much pain and suffering down there. My bad, everybody.”

Our reporter then asked God if Bernie’s age was a negative or a positive.

“Oh, totally a positive. The guy is wise from his years, and is straight up America’s grandpa. What a great cultural-political embodiment, am I right? ‘America’s Grandpa.’ Who wouldn’t want to vote for him? He’s a big lovable grandpa who’s teaming up with Millennials to fix the cluster*** that the Baby Boomers created. Oh, and by the way, screw Baby Boomers. They are the most selfish generation in the history of mankind, and I’ve seen them all. They took the wonderful socially-democratic country their Depression-beating, World War-winning parents made for them, and capitalistically robbed the world and their own offspring’s futures. Millennials should create real healthcare death panels just to off all of their selfish, political failure parents. Lolz. JK, JK. They don’t have to—I can do that Myself. But for real, Bernie Sanders. And I’ll tell you what, if you’re all so concerned about Bernie’s age, I’ll promise you right now that Bernie won’t die until he’s 120 years old. That work? Will you vote for My obvious choice if I swear to you that Bernie ain’t dying until the year 2062?”

The interview then turned to the issue of Obamacare.

“Democrats need to get it together, if you ask Me…though I notice Democrats don’t ask Me very much. Republicans at least pretend they want my opinion. They don’t listen well, they skim the Bible and only pick out the parts they like, and of course their policies on social issues are abhorrent and totally anti-Me, but the lip service is nice every once in a while. But Democrats need to get serious about single-payer healthcare. Jesus got all the Disciples together, they pooled all their money, and they took care of the sick. Doesn’t that sound, literally, exactly like an early form of government-sponsored healthcare? Tell all the Democrats that I’ll have their back if they grow a spine and commit to socialized healthcare. Like, I’m God. I promise them that they’ll win in 2020 if they can fix Obamacare and get rid of this market-based bull. I’m God, aren’t I??”

We finished the interview on the topic of Donald Trump.

“How on Earth did Republicans screw that one up? The most obvious test for Christians in the world, and they failed miserably. But trust Me, that guy isn’t winning again in 2020. Hell, his arteries are so clogged with fried food I don’t exactly have to do much. Didn’t you hear him wheezing during the debates simply from having to exert his trash mouth for a mere 30 seconds? And he never walks up stairs, you know? He talks about winning so much, but I’ll tell you what ain’t winning: that condemned heart of his. Ha! But, anyway, that’s the end of the interview—Ted Cruz is giving a speech in the Senate and I’m gonna send a spontaneous boner his way. He thinks he will be president…not if I can help it! Ha! You can print that.”

Thanks for another interview, God.