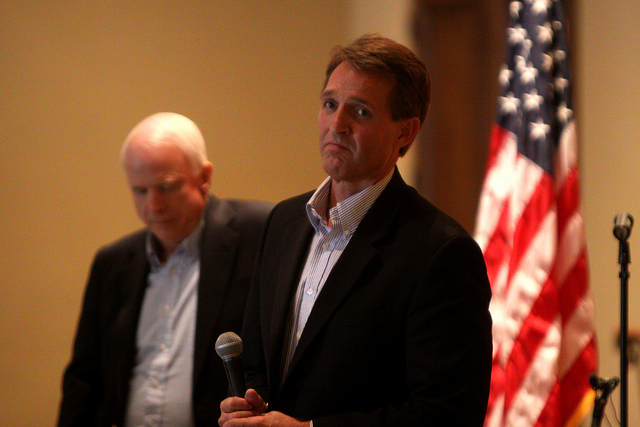 Senator Jeff Flake is confident that he will get the last laugh in his ideological feud with white supremacist Breitbart News CEO Steve Bannon.

“Steve Bannon thinks he can hold my Congressional seat hostage and try to inspire my constituents to fight against my reelection for speaking my mind about President Donald Trump’s unambiguously terrible presidency, but I’m showing him by retiring and withdrawing from the Senate completely!” Mr. Flake told The Halfway Post.

Mr. Flake is not exactly clear how his retiring from the Senate will be an effective method to stand up against radical nationalism, but Flake is adamant that his quitting will really be winning.

“I have enough dignity that I cannot abide Trumpism or nationalism in the Senate, so I’m not even going to stay or try to fight for sober, rational, appropriate politics,” Flake said. “Out of the Senate I will no longer have to be somewhat morally responsible for dealing with it. Now, if I were truly a courageous man I would run for reelection knowing I would lose but with the intention to run as an independent so as to split the vote in order for the much more responsible and deserving Democratic Party to take Arizona’s Senate seat to stop this Alt-Right cancer raging throughout the contemporary GOP, but I’m just going to wash my hands of everything instead and hide. I hope you’re listening somewhere out there Bannon.”

Mr. Bannon could not be reached for a comment, as he lives in a dark cave now, but a spokesperson told The Halfway Post that echoes of “Arizona, my precious” could be heard resonating from the cave’s entrance all morning.