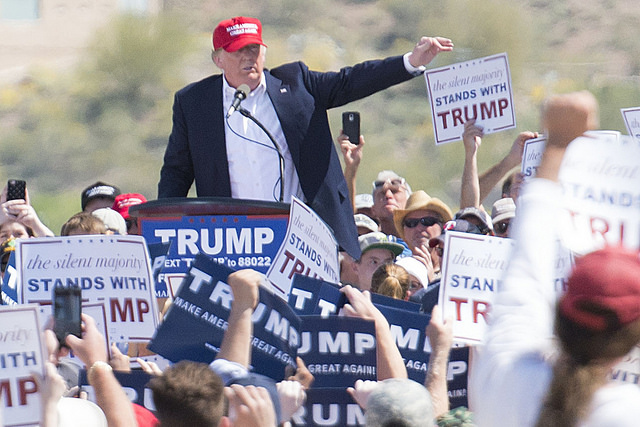 The struggling dating website for Trump supporters, called “Trump.Dating,” just reached a major milestone in its year-long existence, in that the dating pool just obtained its very first female member.

Stephanie Hertz, of St. Louis, made history when she filled out the required fields in the online application and signed up to look for romantic interests.

“I just haven’t been feeling going to bars and stuff to meet guys, and I thought I’d give the Internet a chance to send me someone interesting,” explained Ms. Hertz. “I voted for Trump, and, though I’m not that proud of what the President has done, I feel I identify with conservative men a little more than liberal men.”

Despite the casual nature of her decision to join, Trump.Dating immediately blew up in activity as the 30,000 male members began to compete for her attention. Hertz said that when she logged in she started receiving thousands of messages every single minute.

“It was crazy. So many dick pics I cannot unsee, unfortunately, but there are some good guys on here, too. I’m talking to a handful of guys right now, and kind of ignoring the endless friend requests I get. A lot of people here are really desperate. And there are kind of a lot of douchebags. The guys I have been having conversations with told me that, before I logged in, guys on the website just trolled each other all day and called each other ‘pussies’ and that kind of stuff while waiting for a female to join. But they’re all just very lonely. It turns out women in general are just really turned off by Trump supporters, and think that Trump voters have proven they’re shitty people by voting for him. It doesn’t help that a lot of them are legitimately sexist. And then there is another side of this dating app that is really odd: apparently Trump.Dating has kind of been like a second version of Grindr, the dating app for gay men, and, in the total absence of women, there has been a lot of gay stuff happening. They have a kind of code where they just message each other ‘no homo’ before they meet up to blow each other in public bathrooms, and apparently they think that keeps what they’re doing from being considered gay or homoerotic. I’m gonna be honest, from my experience on this app, a loooooot of male Trump supporters are like freakishly, subconsciously homosexual. I actually get a lot of messages form angry ‘bro’ Trump supporters whose profile pictures are of them fishing or standing in front of giant pickup trucks or holding various guns who tell me that my joining has ruined the app and that I should just use Tindr. Yeah, I have very mixed opinions about this app.”